Generation One: The Search for Black Wealth (Tyler New Media, 2015) 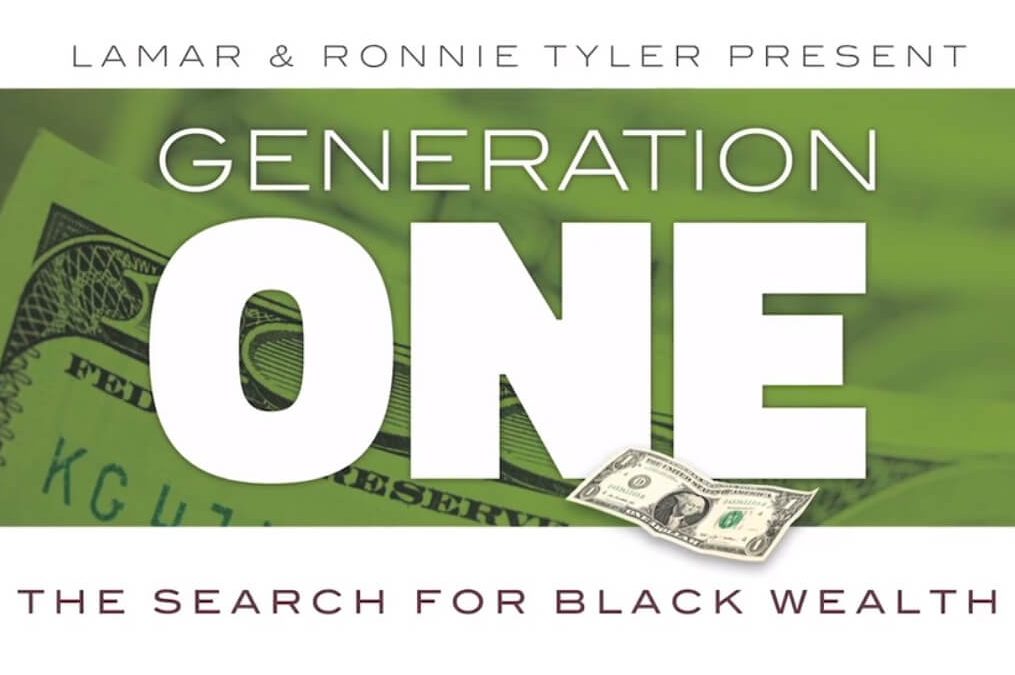 When was the last time you watched a movie encouraging people to build generational wealth?  Wealth creation and sustainability is such a critical message, yet rarely placed in the spotlight for regular people to ponder and pursue.  Instead, society is bombarded with get-rich-quick schemes and gambling bets. Once introduced to Generation One: The Search for Black Wealth (Generation One), I was intrigued to share my thoughts and review of this rare production.

Generation One is a film produced by Tyler New Media – the brain child of Lamar and Ronnie Tyler, a married couple on a mission to promote and celebrate positive images of black families through their online media properties and products. The trailer generated such social media hype that it found its way onto my Facebook timeline.  The DVD was released on July 14, 2015 and Tyler New Media is currently on tour with sold out screenings in Atlanta, Washington DC and Chicago.  You can check out the preview here: http://bit.ly/1Hxbr7K

After viewing the movie trailer, I attended the Atlanta screening armed with high expectations.  Admittedly, I have not seen many films specifically focused on a topic I find myself so passionate about, so naturally I was curious.  I was immediately invested and concerned about whether it would be done “right” or if it would be filled with gimmicks and misinformation. Either way, the preview was tasty bait and I just had to see whether its content would make me the fish (prey) or fishers of men (equip me to teach and reach others).

Will I learn anything new?

Even if you are well-versed in personal finance, living debt-free, and financially secure, you will learn something new.  This film offers historical references that can be further researched, nuggets of wisdom, habits of those with a wealthy mindset, and practical tips to begin your journey today. It also serves as friendly reminder that although African-Americans have achieved a great deal since the Civil Rights Act of 1964, there remains more to overcome and accomplish from an economic perspective.  More importantly, Generation One sparks the conversation rarely discussed among family, friends, or in the community about how to earn, keep and grow assets to benefit future generations.

Who’s featured in the film?  What perspective or value did they bring?

This film is positioned documentary-style, where six “experts” – three men and three women – are interviewed.  Each participant offers facts, opinions and varying perspectives on how generational wealth can be achieved. The film calls out key takeaways during the interviews, which is great for those who like to take notes.

Of the six participants, there were three standouts for me.  They were:

Dr. Julianne Malveaux, Founder and President of Economic Education, a non-profit that designs and delivers curriculum and training that ranges from personal finance to economic trends.  She is a respected leader and speaker on economics (google her) and offers a historical perspective for the lack of generational wealth creation in our communities. My interest was heightened as she shared the disparities of wealth building opportunities since the 1930s.  She referenced the G.I. Bill, officially the Servicemen’s Readjustment Act of 1944, which provided many benefits to veterans of World War II.  One component of the bill granted stipends covering tuition for veterans attending college or trade schools. While this benefit allowed many white soldiers the opportunity to pursue higher education (and economic advantage), the same benefits were denied to black soldiers.  Dr. Malveaux suggests that this is just one of many examples which created a large gap for wealth creation and accumulation in the Black community.

Patrice Washington, Author of Real Money Answers, is the first face you see in the movie preview.  Her interview provides candid examples of the challenges and roadblocks faced when dealing with the materialistic, self-centered mindsets glorified in the media and embedded in Black culture.  I personally identified with several of her comments from my experience as a Financial Coach and Speaker to college and high school students on financial literacy.  Little did I know, she’s the voice I’ve heard many times as the Money Maven on the “Steve Harvey Morning Show”.  She’s a practical resource and highlights the shift needed in our value system, our mentality, and in our outlook on money to accumulate generational wealth.

Lastly, the most straight forward and comical of the bunch was David Anderson, Founder of the Empowerment Radio Network (ERN), an independently owned radio station launched in 2012 to raise awareness of economic empowerment through entrepreneurship.  His passion for the financial progression of the black community was undeniable. Anderson is a well-read entrepreneur (important to note based on his opinions shared in the film) who speaks from the heart on the specific cornerstones of wealth (businesses, real estate, precious metals, annuities, equities, and foreign currencies) and the mindset needed to create generational wealth.  Some of his comments may have come across with militant undertones, but it was the diversity needed to shift the tempo and inject energy boosts into the film.

The remaining experts – Deborah Owens, The Wealth Coach, Lawrence Watkins, Founder of Great Black Speakers, and Dr. Boyce Watkins, Founder of FinancialJuneteenth.com – provide key insights including a list of seven Wealth Habits, specific ways to economically support Black communities, and recommendations to expand the definition and concept of wealth beyond the financial realm.

What could have made the movie better? What was missing?

The film could have provided more insight into the speakers and what qualified them as an experts.  Most of the individuals were new names for me and from organizations established within the last five years, so the viewer is forced to blindly trust that the individuals are credible sources and successful in their own right. After conducting my own research, the accomplishments of the individuals featured are impressive and they have all gained admirable recognition within their areas of expertise.  I’ve now added them all to my personal resource listing.

I also thought the film could have presented at least one personal testimony of a proven prescription for a Black family and how future generations have sustained the wealth.  But even as I write this, I’m thinking, “Duh, that’s the point”!  We are currently living in the age of “Generation One: The Search For Black Wealth”.  Nevertheless, perhaps the film could have specifically shared (step by step, not conceptually) how other cultures build and sustain generational wealth and how it can be mimicked or recycled.

Would I recommend this film to The Master Playbook readers?

Overall, the film was impressive and definitely met, if not exceeded my expectations.   I proudly recommend this to friends, family and readers of this blog. I’m no technical expert, but I thought the editing, lighting and even the music selection was tastefully compiled, and complemented the content. The interviews flowed smoothly and I felt a part of the one-on-one conversations with each person.

While African-Americans are the target audience, the challenges in establishing generational wealth are not limited to one race of people.  Again, this film creates the opportunity to have meaningful, life changing conversations with your family and friends – no matter your background.  It poses questions that ignite self-reflection and accountability for individuals to be more responsible for the sake of a financial legacy for our children, grandchildren, nieces and nephews.

Generation One marks the 5th independent production by Tyler New Media and has sold several copies since its launch.  I purchased the DVD at the screening and plan to host an in-home screening to increase awareness, stimulate a call to action, and use it as a tool to be a fisher of men.  If you are interested in purchasing this film, visit the site at http://bit.ly/1Hxbr7K.

For more inspiration on creating a financial legacy, check out Generational Wealth, Compliments of You!.

I want to hear from you.

What tools and strategies are you using to build generational wealth? What immediate actions will you take to create a financial legacy for your family?

This site uses Akismet to reduce spam. Learn how your comment data is processed.